According to the World Health Organization (WHO), sexual health is defined as a state of physical, mental, and social well-being in relation to sexuality. It requires a positive and respectful approach to sexuality and sexual relationships, as well as the possibility of having pleasurable and safe sexual experiences, free of coercion, discrimination and violence.

When sexual function is adversely affected, it is called sexual dysfunction. Examples of common problems are: reduced sexual desire, erectile dysfunction, genital pain during sexual activity, premature ejaculation and orgasmic difficulties. Elin Gahm is a licensed physician and general medicine specialist who works in primary care in Uppsala. She has expert knowledge in sexual medicine. She teaches medical students, specialists and other health care professionals in sexual medicine and meets daily with patients suffering from sexual dysfunction. The role of healthcare is to treat and prevent illness, which includes giving advice and help related to sexual health. Many diseases and treatments can affect people’s sexuality and can often either be alleviated or remedied altogether in consultation with a doctor/care provider.

“Sexual desire is a prerequisite for well-functioning erection ability. It is common for the man to seek treatment for such problems, but when he talks to the care provider it may emerge that his sex drive is actually impaired. Stress or relationship problems are common causes.” 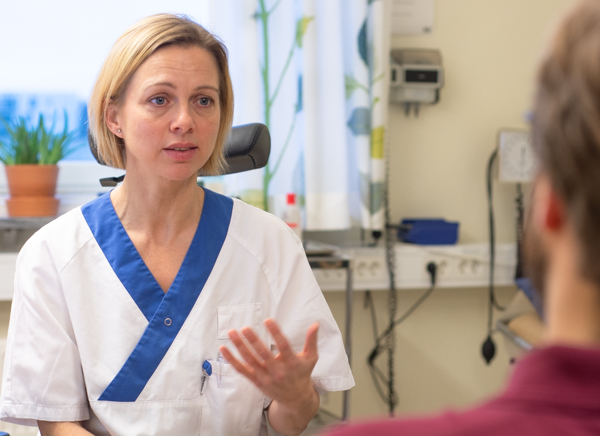 How big is this problem?

Self-reported lower sexual desire is at between 8 to 20 percent for younger women, and less than five percent for younger men, but significantly higher for older people. Among men over the age of 65, 15 to 34 percent report having lower sexual desire. Erectile dysfunction occurs in 4 to 5 percent of men, and is more common among those who are elderly. Problems with premature ejaculation are more common and occur among 8 to 9 percent of men. It is not uncommon for a man to suffer from both erectile dysfunction and premature ejaculation.

What is the reason for this?

Sexual desire is a prerequisite for well-functioning erection ability. It is common for the man to seek treatment for such problems, but when he talks to the care provider it may emerge that his sexual desire is actually impaired. Stress or relationship problems are common causes. An erection requires functioning nerves and good blood circulation, which means that diseases such as diabetes, cardiovascular diseases and high blood pressure can have an adverse effect. High blood sugar levels impair both the nerve function and blood vessels in the whole body, while high blood pressure and atherosclerosis impair the blood circulation. So-called pre-diabetes, a precursor to diabetes, is often unknown to those who have it, but the condition can affect a person’s sexual ability. It seems that impaired erectile dysfunction may appear before symptoms of cardiovascular diseases and diabetes appear. Some drugs, especially antidepressants, can also have a sexual impact. Premature ejaculation is considered to be due to lack of control over the ejaculatory reflex, but there is also an inherited component.

What can you do about it?

It is important to find out if there is a treatable disease that causes the problem. Improved living habits is an important part. Those who sit still a lot, smoke or consume alcohol achieve the biggest improvements from changing their health habits. There is currently no special diet that has been scientifically shown to have a sexual effect.

The psychological part is a major part of the problem, and must be addressed and dealt with individually. However, regardless of the root cause of the problem, it is common to become stressed in connection with sex once a problem has been established. A common phenomenon when it comes to erection problems is that the man assumes a so-called spectator role when he has sex. This means that he expects the erection to collapse, start to think about the problem and distances himself from the sexual part of the situation whereupon the desire diminishes and loses its power as an enhancer of the erection. In premature ejaculation cases, it is common for the man to try to deal with the situation by thinking of something else, which is not sexual, which can instead amplify the problem. In order to treat it, a sexologist can teach the patient some techniques. A doctor may prescribe medicines, which sometimes work very well.

Drugs that improve blood flow to the erectile tissue often work well to remedy erectile dysfunction, both in those who suffer from vascular diseases and those for whom the causes are psychological.